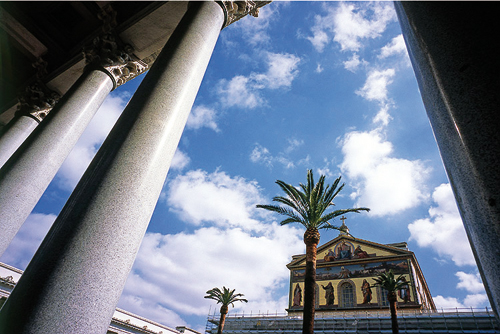 This visit introduces the young people to the story of the Apostle to the gentiles -St Paul. The Basilica was built on the place where he was buried, in the necropolis next to the ‘Ostiensis’ road. Paul arrived in Rome in 64AD and was under house arrest awaiting judgement. In 64 AD Rome was devastated in a terrible fire and Nero blamed the Christians. Both St Peter and St Paul, together with many Christians were arrested and martyred in a period of Christian persecution that lasted approximately 300 years. In 1823 a terrible fire destroyed the old Basilica that was then reconstructed respecting the original aspects of the Palo Christian Basilica. Inside there are mosaics of the 265 Popes from St Peter to Pope Benedict XVI.

St Paul was beheaded in a place called Acquas Salvias outside the Aurline wall. This place is now called Tre Fontane (Three Fountains) as Paul’s head bounced three times on the ground and three miraculous fountains sprung up from the earth. In the same place, Captain Zeone with his 10,203 Christian troops, were martyred during the persecution by the Emperor Diocletian.
To make a school booking, please complete the electronic booking form by clicking on the following link: