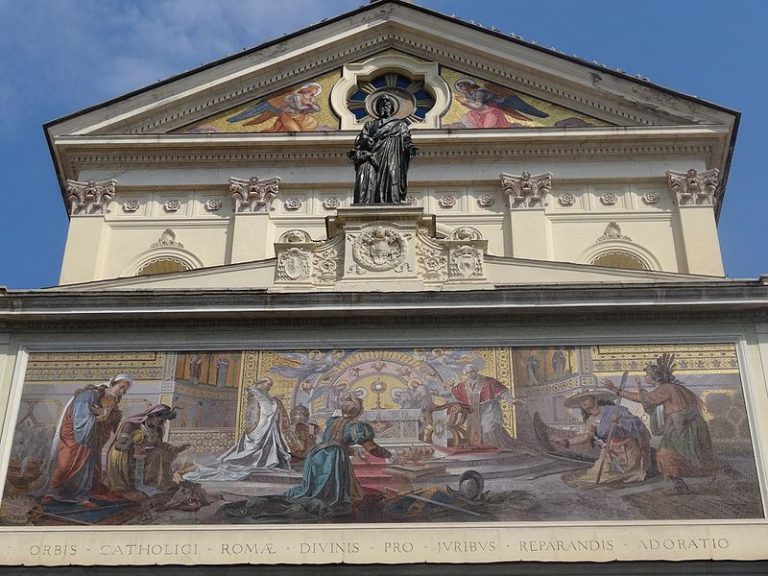 The 26th July is the feast of St Joachim and Anna, Jesus’ grandparents, and therefore we wanted to turn our attention to this Roman parish dedicated to Saint Joachim which is adorned with remarkable beauty and has been entrusted to the Redemptorist Father’s since 1898.

In 1878, when the Ripetta bridge was built and the Prati quarter in Rome was populated, three churches were constructed, one of which, in honour of Pope Leo XIII (Gioacchino Pecci), was dedicated to St Gioacchino (St Joachim). The Church was offered as a gift to the Pope by numerous nations, of which 14 made a notable contribution: Argentina, Ireland, Holland, Belgium, Italy, France, Spain, United States, England, Canada, Poland, Baveria, Portugal, Brazil. Along the central nave each of these nations has a Chapel dedicated in their honour. By looking at the façade of the Church it is easy to understand the reason for its realisation: Eucharistic adoration offered in reparation for all the profane acts performed in the world. This devotion, strongly encouraged by Pope Leo XIII, finds its privileged seat in this Roman Church. In fact, a scene of Eucharistic Adoration before five women that represent the five contents was realised in mosaic along the entablature above the central nave by the Società Musiva Veneziana. This mosaic is beside four statues of Saints who were particularly devoted to the Eucharist: St Alphonsus de' Liguori, St Juliana of Liège, St Thomas Aquinas and St Claire of Assisi.

Raising one’s gaze still further, you see the admirable statue of St Joachim with the Blessed Virgin Mary, behind which is the tympanum mosaic where two kneeling angels worship the Blessed Sacrament. Finally, the majestic starry dome is once again crowned with a monstrance to reaffirm the identity of this place designed for the Eucharistic adoration by the Catholic nations.

Passing into the beautiful atrium that is supported by six Corinthian columns, the extraordinary cooperation between the various nations for the realization of this Church is already beginning to become evident. The bases of the columns are in red granite from Baveno, the walls are covered in Pyrenean marble, the floor was realised in marble from Aquila. The doors are made of Lybanese cedar and the columns that flank the central door are made in pink marble from Russia. These were gifts for the Pope and the Church from the faithful. 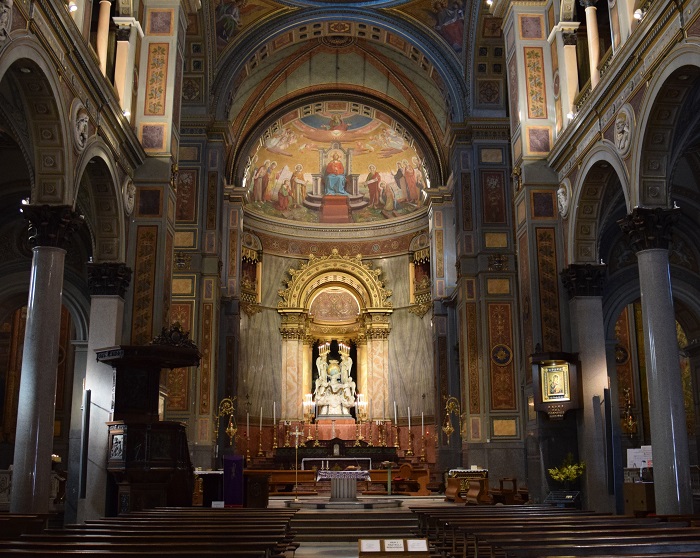 Once you have crossed the main door the magnificence of the Church becomes apparent with all its power. The numerous wall decorations in marble, mosaic, and fresco capture our attention. The chancel is crowned by the enchanting starry dome with its sky sprinkled with stars on a blue background. The heart of the decoration of this church, however, is the Pyrenees red marble altar with a cross at the centre that carries Pope Leo XIII’s coat of arms of in golden metal. The precious tabernacle, which is in the shape of a temple, is surrounded by twenty green malachite tondi which contribute to giving prestige to the altar. Behind the altar, the Levant red marble staircase leads to the location of the throne for solemn Eucharistic celebrations. It was donated by France and is composed of four large white angels, two with candlesticks in hand and two others on the knees holding an inscription that reads: “Eucharistic Heart of Jesus have mercy on us.” The wall decoration of the apse is a wonderful fresco made by V. Monti, in which Jesus is enthroned offering the chalice and the host for Adoration.

Everything in this church revolves around the importance of Eucharistic adoration, the encounter with that throbbing heart that awaits men from all over the world to give Him his love. It is a love that every Christian is called to pour out on our neighbours. In fact, thanks to the difficulties during the war time, this church bears witness to Christian love of our neighbour that comes to view in desperate situations.

During the Second World War, from November 1943 to June 1944, when the German military had already been ordered to raid monasteries and convents in search of Jews or dissidents, the parish priest of the church of San Gioacchino, Father Antonio Dressino , assisted by Sister Margherita Bernés, the engineer Pietro Lestini and the latter's daughter, Giuliana, devised a method to save their brothers. A small group of people were walled alive between the barrel vault of the church and the roof, 50 m from the ground, and received necessities from a small rose window, which was only carefully opened at night. With God's help, the fifteen people present there were saved. Among them were also three Jews. The priest, the nun, the engineer and the young girl received the title of "Just among the Nations" from Israel due to their courageous acts in the service of their neighbours in need.

May this beautiful Roman parish never stop being that throne of adoration where the unanimous faithful implore: "Eucharistic Heart of Jesus, have mercy on us".