“I will protect all those who place themselves under my green mantle of mercy.”

During this year of the pandemic, we have received numerous prayer intentions from all over the world and there have been many people who have entrusted

themselves and their families to the care of the Virgin of Revelation in this great period of trial.

From the morning to the evening of the 12th April, we will recite the Supplication to the Virgin of Revelation and offer 15 minutes of prayer. 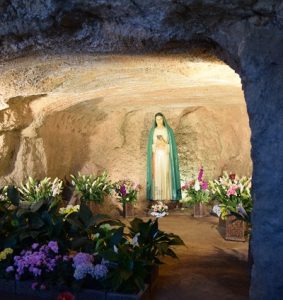 From 8am in the morning to 8pm in the evening, every 15 minutes there will be a devotee of the Virgin in the USA, England, Canada, Ireland, Brazil, Mexico, Argentina, and Italy that will recite the Supplication to the Virgin of Revelation to honour Her and to ask for Her intercession.

Those who want to participate in this devotion by offering 15 minutes of your time in prayer, can register by recording your name, the time (from 8am to 8pm) that you are able to recite the Supplication and the name of the city in the registration form below.

Thank you for the love and devotion that you have for the Virgin of Revelation.

Here’s a quick summary of what to do:

REGISTER by entering your name, city and time (between 8am-8pm on the 12th April) that you will say the Supplication to the in the form below.

PRAY – On the 12th April recite the Supplication prayers at the time you indicated. The prayers are available by clicking this link.

Holy Mass From the Grotto – 12th April at 4pm Rome time / 5pm UK time and 10am in North America the MDR will live stream Holy Mass from the Grotto at Tre Fontane, Rome on Facebook and YouTube. Join Us!

And the Virgin Protect Us