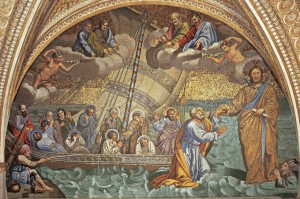 The Navicella, by Giotto di Bondone (1266/7 –1337),which illustrates the scene from St Mathew’s Gospel when St Peter walks on water towards Christ, (Mt 14:22-33) is one of St Peter’s Basilica’s most important works. This icon of faith has greeted visitors leaving the Basilica since the early 14th Century onwards. The mosaic that remains today, high above the central doorway of the main portico of St Peter’s Basilica, contains only a part of Giotto’s original work although the image is identical to the Giotto’s original masterpiece.

The Navicella is set against the backdrop of a stormy sea and the Apostles appear almost overcome by the waves. The storm is depicted by the mythical wind gods to the upper right and left of the scene whilst the boat’s sail bellows with the storm. Christ is in the foreground and is the only person to remain upright, at home in the chaos of the storm. St Peter calls out to the Lord saying, “Lord save me” (Mt 14:30) and Lord extends a supporting hand to prevent him from sinking into the stormy sea.

The Gospel account emphasises the fact that the Apostles were “terrified” and “overcome with fear” (Mt 14:26) and so Giotto paid particular attention to show the emotional reaction of the Apostles to the miraculous scene. There are Apostles in the boat with their faces covered as a result of their fear, another Apostle is praying whilst on the right side an Apostle clings to the side of the boat whilst looking towards Christ. At the helm, one of the 11raises his hands in total astonishment to show the miraculous nature of the event taking place. St Peter is sinking but he has his eyes fixed on Christ as if to remind us that in our difficulties we too must turn to Christ for support.

In the foreground on the left hand-side, Giotto added a man fishing who, according to Vasari, is a self-portrait of the artist. Iconographically, the fisherman represents the fact that Christ’s disciples are fishers of men with the mission to go out and Baptise all nations. The water represents the water of Baptism in which man must be immersed to become members of the Church. In the foreground on the right hand side Giotto placed the figure of Cardinal Stefaneschi who commissioned the masterpiece as an act of gratitude.

This wonderful scene transmits an inspiring story of faith to all leaving the Basilica. It speaks to the pilgrims in an ecclesial sense and also a personal spiritual sense. The ecclesial interpretation deciphers the boat as a symbol of the Church that must pass through many storms, or difficulties, before leading souls to the heavenly homeland. St Peter is at the helm of the boat and is supported, at the stern, by St Paul who represents the Bishops who are there to help lead the Church. St Peter is sinking by his own strength but is supported by Christ who sustains him in leading the Church. During the historical period in which the Navicella was realised, the Seat of Peter had moved to Avignon and so the message to the Church was that the Lord will guide the Church out of these difficult times via the person of the Holy Father. It was a call to have faith in the Lord who said to the frightened Apostles: “Take heart, it is I: have no fear.” (Mt 14:27)

The scene also speaks to pilgrims in the personal sense because the waves represent the difficulties of living the Christian life and the trials that we all inevitably face in living up to the faith. However, when the tempest rages, when our faith starts to fail, we only need to follow St Peter’s example and hold out our hand to the Lord who will support us in our every trial. Jesus looks towards the departing pilgrim, reminding them that they should take heart in all their trials, O men of little faith, because it is I! (cfr Mt 14:27,31)