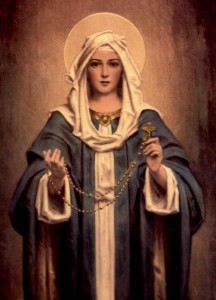 Pope Innocent XI instituted the feast of the Holy Name of Mary on the 12th September to thank Our Lady for the victory of the famous battle of Vienna against the Ottoman Empire on the 11th September 1683. On this day, Europe found itself on the brink of distruction. The Ottoman forces had invaded Vienna with the intention to exterminate all Christians and then to capture Rome. The intervention of the Polish King, John Sobieski, was decisive because, as the head of the Holy League, he was able to liberate Vienna from the seige.

The feast of the Holy Name of Mary, was established on the 12th September because it falls in the octave of the birth of Mary and also to remind Christians that every victory is possible through the intercession of the Mother of God. In 1970 this feast was transferred to the 8th September together with the feast of the birth of Mary. However, following the attack on the twin towers in New York on the 11th September 2001, Saint Pope John Paul II wanted to restore the liturgical feast to the 12th September. 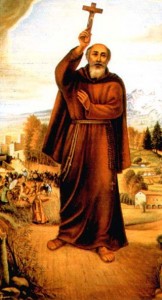 Pope John Paul II understood that the date of the attack on the twin towers of the 11 September was by no means incidental but that it referred to the battle of Vienna in which the Turkish forces were defeated. A main protagonist of this victory, alongside the Polish King, was the Capuchin monk, Marco d’Aviano. He was appointed by Pope Innocent XI to build a Holy League to fight against the Turkish invasion. The monks untiring mediation enabled the European sovereigns to entrust the leadership of the League to Sobieski. During the two months of the siege, Marco d’Aviano encouraged the soldiers and the Viennese people to entrust themselves to Our Lady and to invoke her help with the prayer of the Holy Rosary.

On the 27th April 2003, Pope John Paul II declared the Capuchin Marco d’Aviano blessed and declared him to be a prophet of divine mercy, defender of liberty and the unity of Christian Europe.

With his Apostolic Letter Rosarium Virginis Mariae St Pope John Paul II declared 2002-2003 the year of the Holy Rosary. He wrote: “At the start of a millennium which began with the terrifying attacks of 11 September 2001, a millennium which witnesses every day numerous parts of the world fresh scenes of bloodshed and violence, to rediscover the Rosary means to immerse oneself in contemplation of the mystery of Christ who “is our peace”, since he made “the two of us one, and broke down the dividing wall of hostility” (Eph 2:14).” (Rosarium Virginis Mariae n.6)

Mary is the Mother who has never abandoned the children who trust in her. To recite the Rosary is a precious way to work towards peace in the world.