As the 31st October approaches we see little devils, witches, skeletons, pumpkin lanterns and such things filling the shops. To some it seems ‘harmful fun’, to others, a ‘commercial exercise,’ but what should the Catholics view of the festivities of Halloween be?

Halloween is thought to have originated from the Celtic festival of Sambain which was celebrated on the 31st October which was the eve of the new year. On this night the separation between the land of the dead and the living was blurred and evil spirits could roam the world cursing crops and taking souls. The only remedy was to dress as a spirit to avoid being entrapped by them. The celebration of Halloween therefore has its roots with an occult celebration. The occult world defines the feast as, ‘the most magical day of the year….the most important feast for the followers of Satan’.

The practice of pumpkin lanterns also evokes the occult as it reminds us of the legend of the evil blacksmith, Jack, who made a pact for his soul with the devil and upon his death found no peace and so placed a lantern at the door of the dammed and used it to roam the living world. Similarly, the game of ‘trick or treat’ evokes a similar Celtic legend that tells of the elders of the Celtic emperor who went from house to house in search of offerings for the pagan gods. If the household complied, the were left alone, if not, however, they received a ‘curse’ or a ‘trick’ to use the words of the game today.

Now these festivities do not seem like the ‘harmless bit of fun’ portrayed by the shops selling these items! 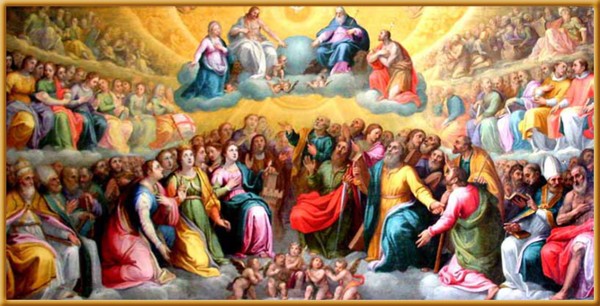 What is the Christian view of the festivities?

In the year 840 AD, Pope Gregory IV moved the feast of All Saints from May to the 1st November to emphasize the Christian belief in Saints and Christ’s victory over evil. The eve of the feast was called ‘All Hallows Eve’, which means the eve of All Saints. The Christians celebrate the luminous feast of All Saints, the pagans celebrate ‘Halloween’! The Church wanted to remind everyone that Christ has won the battle over the evil one for mankind and to celebrate the lives of the Saints who now live in the ‘light’ with Christ.

In the light of Christian belief, it is easy to identify a number of elements in this celebration that are incompatible with our faith in Christ and His teaching.

Halloween gives honour or celebration to devils and therefore the evil one which is explicitly against the first commandment: ‘You shall have no other Gods before me’ (Deut 5:7)
This is a feast that has its roots in occult practices. Taking part, ‘just for fun’, reduces our ability to discern the evil inherently involved in this kind of activity. Children will think that devils, demons and spirits are fascinating things that are not evil in themselves and so could therefore expose themselves to evil.

‘Trick or treat’ is contrary to Christ’s message of love of our neighbour! If we translate the ‘trick or treat’ game into its effects it basically says that you must give me something nice, even though you may not know me, or I will do something bad to you! This is contrary to God’s commandment to ‘Love your neighbour as yourself’ (Mk 21:31)
What models do we want for our children? Do we have a desire that our children aspire to be ‘devils’ or do we wish that they seek to imitate Christ and to ‘be Holy because I am Holy’ (Lv 11:44). If sanctity is our desire then we should be imitating Saints and not devils and the powers of the evil one!

How to Celebrate the Feast of All Hallows Eve – the Eve of All Saints:

Here are a few practices that will help a Christian celebrate the feast of All Hallows Eve!

Celebrate the Saints! Don’t dress up as devils, dress up as Saints and exchange stories about their lives and what they did to follow the light of the world, Christ!

Make reparation! On this night thousands will, without even realise it, offend the Lord and who loves us so much and died to free us from the evil one! Therefore, visit a Church to tell the Lord that you believe in Him, the one true God and to thank Him for coming to the world to free us from the powers of darkness.

Be vocal! Tell all your friends so that they can think about this festival with the mind of the Church! At least make them aware of the deeper meanings of the celebrations in which they participate.